This blog is aimed at investigating the architectural design and impact of the United States Air Force Academy Cadet Chapel just outside of Colorado Springs, CO. 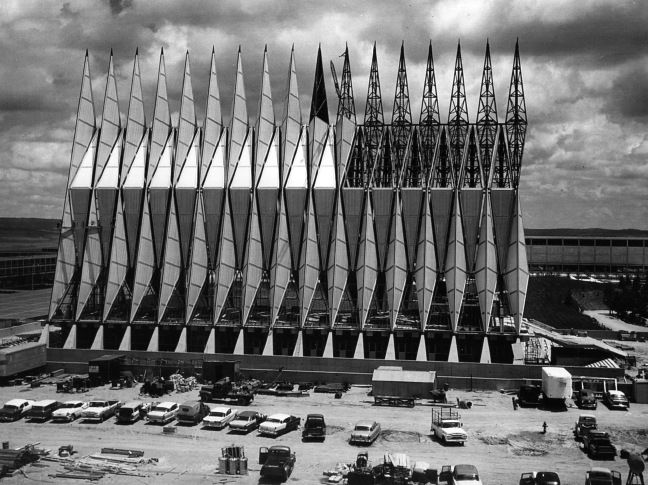 The Chapel mission is “to inspire men and women to become leaders of character through spiritual formation.”

The Cadet Chapel is home to three complete worship areas which cater to members of the various religions present at the academy. On the main floor lies the Protestant Chapel with the iconic tetrahedron-based walls and pinnacled ceiling.

Below the main floor you’ll find the Catholic Chapel with its abstract mosaic mural and beautiful stained-glass lining the walls.

Finally, the Jewish Chapel is located on the same floor as the Catholic Chapel and features a round design with purple stained-glass.

A Buddhist chapel was added in 2007 by creating a space within the existing space on the lower level. Additional space is available for members of any other religion who require a spiritual space on campus.

The Chapel is utilized by Academy faculty, staff, and students, but is also a very popular tourist attraction and an incredible location for a wedding too (if you’re eligible for it).

The section view below clearly shows the layering scheme for the various spiritual spaces. 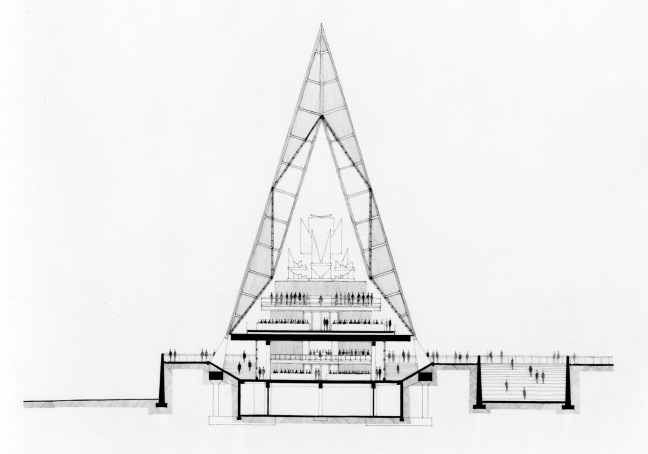 The plan view below shows the main floor (Protestant nave) and clearly indicates the importance of symmetry in the design and the presence of rhythm between structural elements.

The Chapel in Context

Here you can see how the chapel fits in with the Air Force Academy grounds; It is really a focal point for the entire campus. The great lawn next to the chapel draws even more attention to the 150 ft tall set of 17 spires which can be seen from just about anywhere.

The sharp and metallic design of the Cadet Chapel are a perfect fit for the Air Force Academy, which is particularly apparent while the similarly pointy and gray jet plane sits in front of it.

My “sky Pilot” Career (Landman, 2012) was wonderfully informative as it described the intricacies involved in the interior design including significant design decisions and even discussing the costs involved and where the funding came from for specific items. I would like to have an opportunity to read more of this book after familiarizing myself with it for this scavenger hunt, and I actually ended up purchasing the eBook in order to make further reading much more likely. Nathan Landman describes his experiences at the Cadet Chapel in great detail not only from an architectural standpoint, but also a spiritual one. It seems from his experience, as well as the accounts of others I came across during my research, that the spaces created within this building are powerful and unforgettable but perhaps more importantly they are unifying and effective spiritual places with form strongly influenced by function.

On the Wings of Modernism (Nauman, 2004) had lots of insight on the history and controversy of the Cadet Chapel. Ranging from the issues of maintaining separation of church and state while making a chapel the focal point of a military academy, to the issues of designing a religious building which could accommodate members of different religions simultaneously while taking into account the possibility of changing demographics over time. This book contains a huge amount of information on anything and everything I wanted to know more about (not just concerning the chapel but also the academy as a whole), which shouldn’t come as a surprise since the author chose a picture of the chapel itself for the cover of his book. I was surprisingly fascinated by the coverage of monetary concerns and debates between powerful people in bigwig meetings but then again, spending 3.5 million dollars on a chapel for an Air Force Academy in the 1960’s couldn’t have been the easiest thing to agree on.There is a substantial historical exploration undertaken within the pages of this book, and once again I find myself wanting to read more. If all else fails I should be able to find time for further reading when I retire someday, but hopefully I’ll have time much sooner than that.

In this perspective drawing I focused on the geometric patterns present in the exterior of the building which create a profound rhythm. 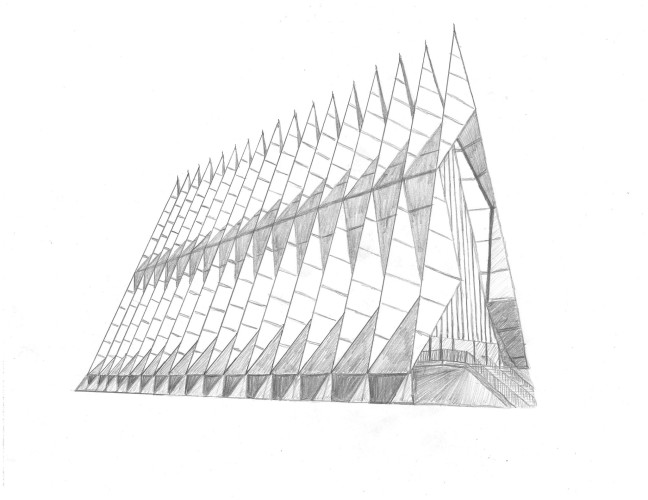 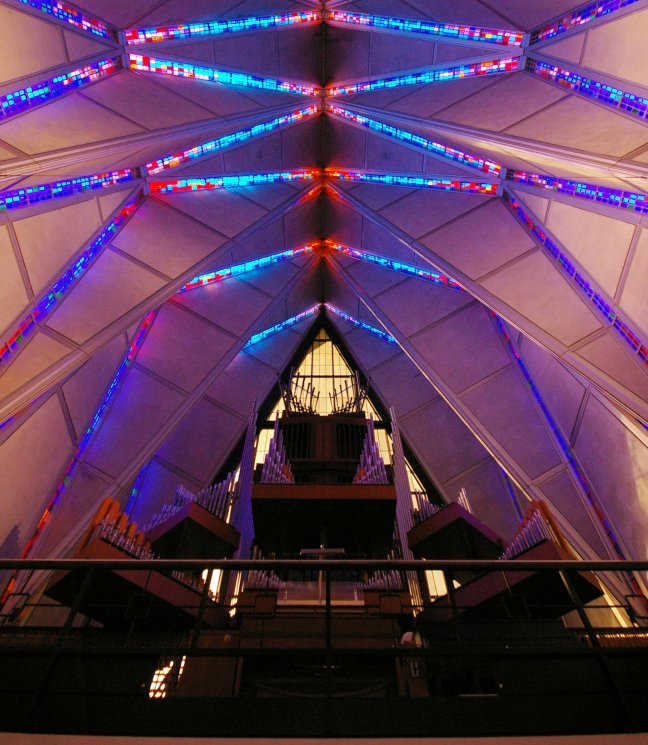 One of the most incredible additions to the space from both an aesthetic and auditory sense is the stunning pipe organ nestled in the choir loft in the rear of the protestant nave. This magnificent organ has 4,334 pipes and cost $122,000. As can be seen in the photo above, the stained glass veins running up the walls towards the 17 pinacles is absolutely breathtaking. Part of what makes this stained glass special is the intentional chipping of about 35% of it, which simulates jewel-like facets. They really managed to fill every crevice in this chapel with as much beauty as they could.

The Chapel is located at the Air Force Academy campus on the outskirts of the Colorado Springs area. On the western side of the Chapel there are profoundly beautiful mountains, and on the eastern side there is a large mountain valley. The Campus is located in the valley and has a rural feel to it since it’s separated from the densely populated urban area by at least a dozen miles.

Col. Robert Bruno acts as the chaplain for the academy and in this brief interview he gives us an idea of the usage of space within the structure with a little bit of history thrown in too. He reveals the reason for the Protestant chapel’s prominence within the building and describes the growth and diversity of the community over the years since the chapel’s completion in 1962. After the interview there are detailed descriptions of each of the various spaces within the structure which provide everyone with a place for spiritual enrichment on the academy grounds.

The video is from a presentation at the Cadet Chapel 50th Anniversary event.